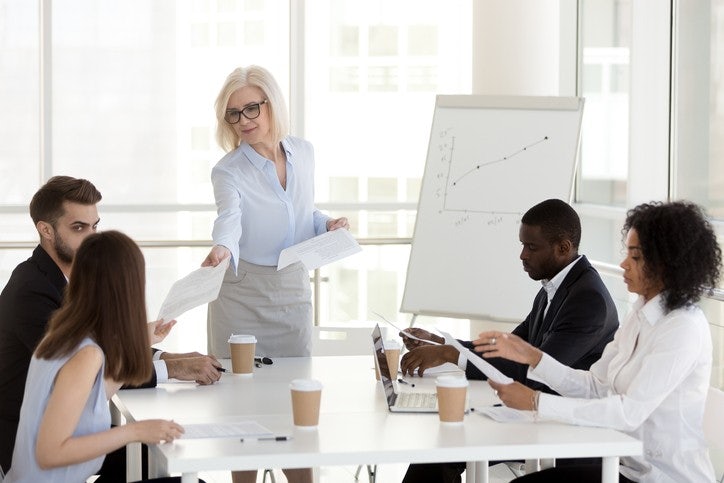 Despite praises for teamwork, many businesses operate in an unspoken culture of individualism. The origins of this individualism in the US, however, didn’t start with the emergence of corporate structures. It started on the farm.

America’s climate and land are optimal for growing corn. Moreover, the stalk is relatively easy to harvest single-handedly. Eventually, horse-drawn cutters came into use, followed by mechanical versions as early as 1850. These solutions required just one person to operate.

Over the years, society grew around the farm. Over centuries, this individualism would influence the culture and the businesses within. Therefore, it’s a fitting coincidence that in recent years, the term “silo” has come to represent the isolating effect of disjointed groups under one structure.

Aligning different teams amid this silo effect has become an increasingly common challenge. In fact, in a post-M&A environment, it’s a top concern. However, with the right approach, the sales manager can unite groups and deliver performance that’s greater than the sum of its parts.

Research from McKinsey shows that 47% of survey respondents believe that recent M&A activity hurt morale. Therefore, the sales manager must focus efforts on maintaining or even boosting morale, right?

This same body of research uncovered another finding. A full quarter of the respondents indicated that they never faced morale issues. Rather than react to the responses of the 47% above, an efficient sales leader should consider what is different about the post-M&A employees that never suffered diminishing morale.

Here’s the difference: The participants who saw no drop in morale were part of M&A transitions that happened fast. Sometimes speed matters. “Employee pain was briefer and minimized by the system changes, and, in addition, employees clearly understood why they were being asked to change,” explain the authors. Sales managers can put this revelation to use by communicating the purpose of the M&A activity. Simultaneously, the sales manager must start these conversations early. Too often, unchecked assumptions reside quietly beneath the surface. The longer they remain, the more immovable they become. Take decisive action.

Consider mapping alignment goals to specific, measurable business outcomes. Alignment among teams is a complex goal because it’s subjective. What appears normal to one is a stark change to another. Gillian Tett, the author of The Silo Effect, explains that patterns in “our culture [appear] ‘normal.’ So much so, that we rarely even notice them at all.” Or, as Nobel Prize-winning psychologist Daniel Kahneman puts it, “We are blind to our blindness.” Alignment is sometimes difficult to see because it’s difficult to measure. Setting numeric goals provides those measurements.

It’s important to remember that metrics like win rate and profitability don’t prove that a company has achieved alignment. However, other measurements like time to productivity and attrition might be good indicators of the workforce’s ability to align. Sales managers choosing to use metrics to gauge alignment should signal their intention to do so. The sales professionals need to know their goals if they’re going to develop a strategy. It may seem that holding teams accountable for these targeted goals will create anxieties. However, lasting anxieties often arise when teams are ambivalent about their standing and perceived effectiveness. Clarity of goals prevents this problem.

Lastly, this approach is important because some of the most effective pre-M&A sales professionals might discover that what worked then doesn’t work now. After the M&A event, priorities often change, and product mixes rebalance. Those who were once major contributors may become disillusioned. With clear goals, they can pursue the right opportunities.

The time when coaching is most needed — after an M&A event — is the time when it’s most likely to disappear. Amid the confusion and competing priorities of a merger or acquisition, coaching often falls to the bottom of the list. It shouldn’t. Coaching remains a critical way to drive business results.

In a post-M&A environment, groups are fractured, priorities are changing, and relationships are still forming. These factors create distractions that can undermine coaching. This outcome derails the very purpose of a merger or acquisition: driving synergies.

These synergies emerge when coaches help team members work together to solve problems. They should emphasize on developmental coaching, which is characterized by a coach who is a resource and fosters self-discovery. Unfortunately, in the upheaval of a merger, coaches occasionally resort to shortcuts like “telling” and “fixing” rather than empowering the sales professional. The problem with telling and fixing is that it doesn’t create a sense of buy-in among the team. Moreover, it creates defensiveness among team members. Telling might work for the day, but it won’t work for the year. Prioritize coaching. It will drive business outcomes and bring the team together.

Driving sales alignment requires leaders to push back on outdated individualistic drives. This is a particularly difficult challenge in selling organizations in which internal competition is common. With early, decisive efforts, the sales leader should signal the intent of the merger and the business outcomes to be measured while providing supportive coaching.