It's Ok to Fail — In Fact, Science Tells Us It's Necessary 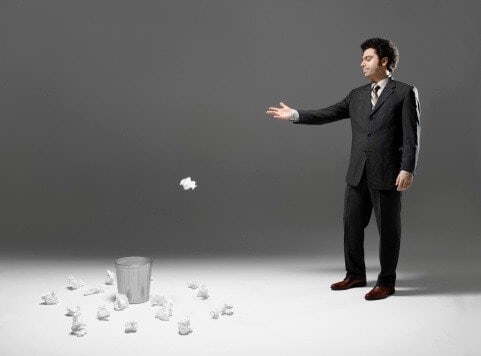 Learn more about Richardson Accelerate, the sales performance platform at the heart of our blended learning training solution.

For most learners, the goal is to "ace" the test. Recent research, however, shows that the goal should be to just take the test.

Traditionally, tests serve as a tool for measuring what we know. For most of us, this kind of assessment instills anxiety, but a study published in the Journal of Experimental Psychology may finally lay that anxiety to rest. Researchers from the University of California, Irvine have uncovered what they call the "pretesting effect."

The researchers examined if failing a test can improve future learning. To do so, they evaluated the benefit of testing content before learning. This "pretesting" meant that participants were likely to answer the questions incorrectly given that they had not yet learned the material. After taking this pretest, the participants were given the opportunity to read a selected passage, which covered the pertinent material. Then, they were tested again, with both the pretest questions seen earlier and new questions.

The results were striking. "Although participants largely failed on the initial test (answering 95% of the questions incorrectly), the effect of those failures was to increase retention of studied content." Failure set the stage for success.

Moreover, the success of the pretest group outpaced a second group that did not receive a pretest. Instead, they were given 10 minutes to study the passage before the first test. This group underperformed the pretest group on the final test. Findings like this reveal that testing has value no matter how many questions are answered incorrectly. That is, the mere act of taking the test serves to "prime the pump" for learning.

With strong results like these, some may ask if it's even necessary to answer the pretest questions — why not just read them? An additional fifth study determined that "attempting to answer prequestions was significantly more effective than reading the same question and attempting to memorize it." Pretesting always wins.

This is good news for two reasons. First, it sheds new light on our understanding of testing. The study shows that pretesting drives learning rather than just measuring a baseline. Second, it gives those taking the pretest reason to relax. Poor test performance is less demoralizing with the knowledge that the score doesn't matter.

Pretesting works through the principle of “priming,” which is the effect that previous experience has on the accessibility and encoding of new information. Research suggests that attempts to retrieve information during the pretest lay the groundwork for building “retrieval routes between the question and the correct answer.” It’s also possible that the experience of pretesting encourages a “deep processing” of the question that would otherwise be lacking. The participants get a jump start on encoding answers.

Benedict Carey, a New York Times reporter and author of How We Learn, suggests that incorrect answers prevent the "fluency illusion," which is our misperception of what we think we know. This idea underscores a critical takeaway from the research: pretesting is more valuable for the learner than it is for the instructor.

Traditionally, learners are quick to dismiss the pretest as a measurement that's pertinent only to the teacher. The truth, however, is that the pretest serves the learner more than anyone. Pretesting in sales training is not a "nice to have;" it's a "need to have" that is, in a sense, loosening the soil in preparation for planting new information. That is, “explicit memory” occurs when one’s performance is tied to their conscious recollection of an earlier experience. Their findings show that pretesting, and tests in general, should be viewed as learning tools rather than just as means to assess and measure.

These findings are upending conventional notions of testing. Learners are beginning to see tests as less of an evaluation and more of a sustainment tool. Here, at Richardson Sales Performance, we've seen the efficacy of pretesting in sales training across thousands of learners. As our sales training participants embark on a program, they begin with a pretest. This, of course, helps prep the learning process while assisting them to gauge their knowledge base before training begins.

Meanwhile, shorter tests, placed throughout training for our Accelerate Digital Learning Platform users, helps maintain the momentum of their learning. By bookending the instruction with tests, participants benefit from pretesting while seeing the uptrend in their skills from the start of training to the end.

Learn more about Richardson Accelerate, the sales performance platform at the heart of our blended learning training solution.