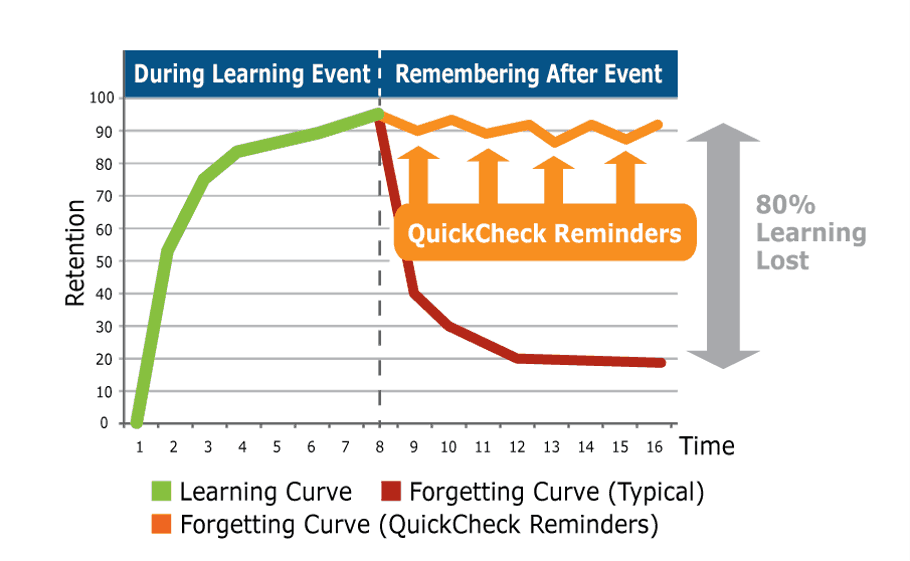 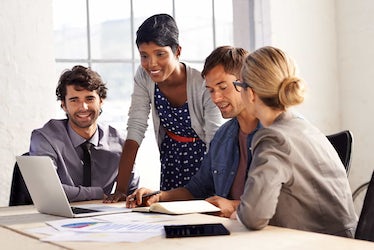 How long until your sales reps forget what they learnt at your sales kick-off meeting and training events?

Most people can sing along to their favourite songs from their youth without even thinking about it yet still forget information they read, heard or learnt after just a few days. Knowing that the ability to recall is limited, why then do companies still structure training and learning programmes in a manner that takes sales reps offline for a period of time, immerses them deep in new ideas and behaviours, and then send them back out into the field expecting that it all sunk in and is being applied without fail?

Many companies hold sales kick-off meetings or training programmes early in the year with lots of great information for sales reps to absorb and time for networking, team building and sharpening of skills. You just made a huge investment in your sales reps, but with all of the content and hoopla, how long do you think it will take for your sales reps to forget what they learnt? What can you do to extend knowledge retention? The answer to both questions might shock you.

In 1885, Hermann Ebbinghaus published a very famous paper in psychology called, “On Memory.” The core premise of the paper has been dubbed, “The Forgetting Curve,” which posits that as soon as you learn something, you immediately start to forget it. In fact, most of the forgetting happens in the hours and days right after you learnt it.

With that in mind, what are the implications for your sales reps? Within 30 days of a training event, 79% of what people have been taught is forgotten. That’s nearly four out of five facts. The amount of retention doesn’t fluctuate with the quality of the material or the experience, nor does it matter whether it was done in a classroom or online.

We’ve conducted over 17 studies at Harvard Medical School to test this phenomenon. In one of the greatest medical schools in the world with very smart people who work very hard to get in and stay there, we found the exact same statistic.

How does what we learnt in our studies at Harvard apply to sales reps? To find out, we conducted a benchmarking study in early 2012 in which we talked to and asked questions of hundreds of sales reps and district sales managers.

Trainers have got a tough job, and it is getting worse. I blame Silicon Valley for all of this. Why? Because if you look at what Google, Apple, Amazon, Twitter and Facebook have done over the last five years, they’ve totally changed people’s expectations of how they should interact with the world in their daily lives. The notion of there being “an app for that” is pretty much something that people expect now. They’re not interested in sitting down and spending hours in front of e-learning modules nor days in a classroom. They will do it if they must, but that has become a greater challenge amidst the rise of the mobile social world. As trainers, you’ve got to be able to play in that world as well.

The Ebbinghaus studies are over a century old and have been replicated many times. But it’s only been in the last few years that we have started to identify neurological and neurophysiological reasons behind why our ability (or inability) to recall works the way it does. The simple answer is that it is just the way long-term memory works: if you only hear something once, it essentially does not get processed into long-term memory.

Some researchers have been able to show that a concept called the “spacing effect,” which basically repeats material over regular intervals of time, actually does change the creation of neural pathways in the brain. Using the spacing effect, the same information gets encoded differently in the brain when it’s learnt through repetition, and it’s preferentially retained so that you can access it when you need to (just like your exposure to top-40 radio hits and your ability to remember the lyrics decades later).

The challenge in effectively training your sales reps is to figure out how to cope with the reality of today’s short-term attention in a mobile world. Acknowledge and accept how human memory works — we’ve ignored it for far too long. It is a physiological issue that we cannot change, so we’ve got to align with it. We must also deal with the issue of the lifestyle and expectations of our sales reps and our other learners. Ultimately, it’s got to fit into the needs of your enterprise, including your specific goals of the training, as well as the broader goals of your company.

If you ignore the limitations of knowledge and skill retention, then you are likely wasting a great deal of your time and training budget. But you still need to impart new information and techniques to your sales reps to help them sell.

In my next post, I’ll tell you how we work with clients to overcome the natural limitations of memory and increase the ROI of training initiatives for your sales reps.